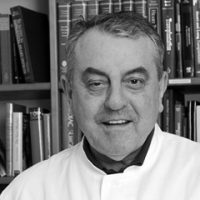 October 1970-May 1971
Residency/Assistant Doctor at the Urological Clinic Siebentischwald, Augsburg

Residency in Cardiovascular- and Thoracic Surgery, Abdominal and Transplantation Surgery and Trauma Surgery.

1985
University-Professor (C4) at the Free University Berlin, and Head Physician of the German Heart Center Berlin

Since 1995
University Professor (C4) at the Humboldt Medical University Berlin

Since 1. January 1986
Exercise of office with continued establishment of the German Heart Center Berlin, especially the Surgical Division.

Since 1988, the German Heart Center has planned to perform 5000 Surgical Operations, of which 3500 involve Heart-Lung-Machines.

October 2004 has seen the German Heart Center to capacitate more than 50 000 Operations in all aspects of Cardiac Surgery.

In 2014, more than 76 000 Operations have been performed on the Open Heart at the German Heart Center Berlin.

Since 1988, Establishment of a preliminary Division for Paediatric Cardiology as a basis for the foundation of a Program for surgical treatment of Infants and Children. This has become one of the largest programs in Germany with more than 500 operations on Congenital Heart Defects.

Included in the aforementioned Program is the Heart Transplantation with currently more than 1800 Transplantations, placing it at the largest Program in Germany and one of the top 5 largest around the globe.

About half of the patients originated from Berlin, whilst the other half were from the former German States. Since the fall of the Berlin Wall, Patients are coming in from Berlin and its proximity, from other parts of Europe and from overseas.

Since 1987
Implantation of artificial Hearts and Circulatory Support Devices (VAD) in more than 2300 cases- the most implanted world-wide. Multiple pioneer operations (for example VAD in children, Rotational Pumps, etc.). Foundation of “Berlin Heart”, the only company to produce VADs for long-term use in Europe.

1987
Foundation of the Academy of Cardiotechnic in Berlin- the first such schooling facility in Germany. The Profession “Cardiotechnic” has not officially existed during that time. Technologically interested Nurses were trained in the operating rooms and assumed the role in controlling the Heart-Lung-Machines.

Since 01. October 1998
Additional Medical Director of the Heart Center Cottbus

2012
Emeritus Professor of the Charité

30. September 2014
Termination of Office at the German Heart Center Berlin

Secure a second opinion from an experienced Chief Cardiovascular Physician.

I will call you back as soon as possible. Just name a timeframe most convenient to you.